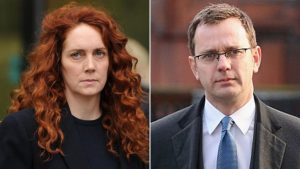 I’ve been following the Hacking phone trial with considerable interest. It would not be prudent to comment on testimony or my opinion on the evidence submitted so far. After all I may have undue influence on a juror. I don’t but for the avoidance of doubt I have no direct connection with any participant. For any direct comment I strongly recommend the coverage provided by The Drum, which has excellent and thorough trial coverage.

Where though is the coverage in more mainstream media. The trial which produces revelations almost daily has rare coverage on the BBC, ITV or C4. Sky I would expect to be circumspect given the Murdoch connection but they are supposed to cover news and given the 24hr nature of BBC News 24 and Sky News surely they could provide some analysis and reporting rather than another fifteen reporters in Sevastopol plus the John Simpson and Panorama crews, all repeating the same thing.

Anyway back to Hacking. The trial has raised some serious issues (as did The Leveson Inquiry) regarding freedom of speech and the conflict in my own head between the type of coverage required to uncover corruption in public officials (Expenses scandal etc.) and the right to a private life. Why does anyone care who Hugh Grant has sex with or whether he was paying for it.

As only Rebekah Brooks of the defendants has appeared on the witness stand it is of course to early to judge any evidence, but what has become clear at Leveson and this trial is the culture, attitude and approach of a national newspaper and its reporters. The absence or non-enforcement of management controls has also been highlighted. None of the defendants are on trial for being bad managers, but the lack of financial controls at the papers should send most Financial Directors spinning to an early grave. What the jury believes is of course a matter for them and the evidence presented to them. Which stories are and are not printed in newspapers broadcast or otherwise reported is a matter for all of us. Outside of true police states, what we see and hear is decided by a small elite deciding what stories get column inches or broadcast time. The Internet has multiplied the availability and direct access of reporting to unbelievable levels yet so much remains drivel. So much is repetitive and shows no insight. With all the news in the world why is 24hr TV on an almost totally hour by hour repeat. You can click on Sky News anytime of day and see the same clips repeated over and over again regardless of what else has happened. With the advert repeats it is a continuous dose of Deja Vu and none of it is about the Hacking Trial and the behaviour of one or more News International Executives.

Of course I am unusual in that I am concerned about freedom of speech whether it is censorship, snooping, police misbehaviour or the actions of newspaper reporters. What do all these stories have in common? They all reflect the closeness of a political and media elite all feeding like cannibalistic vampires off of each others actions, whilst trampling over the rights, opinions and feelings of their victims, Whether it is the family of Milly Dowler, Stephen Lawrence or one of the victims of misreporting, misbehaviour or misdeeds. Our press and mainstream media, failed to report accurately, failed to check their facts and allowed statements by police and others to be misused or believed regardless of the evidence. The press paid for many of these stories bribing public officials in the process. A picture of a royal at a party more important than the corruption that paying for the story exposed. The same press baying for MP’s blood over expenses whilst casually shipping thousands to their contacts for a snippet of gossip or paying a self confessed phone hacker thousands to keep quiet or a publicist to settle out of court.

Now some of these executives are dependent on the very legal system they have done so much to undermine and ignore. I wonder who the jury will believe.